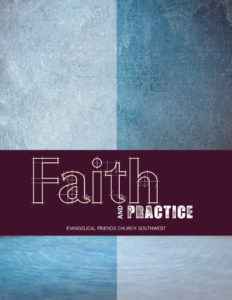 Evangelical Friends Church Southwest (EFCSW or Yearly Meeting) consists of the members of its local churches.

Every individual who joins a local Friends church automatically becomes a member of the denomination, the Yearly Meeting. Although it is no longer part of our official name, the term Yearly Meeting may be used as an equivalent of EFCSW.

Friends, from earliest times, have sought to foster fellowship and cooperation in advancing the cause of Christ in the world. To this end, they have formed connexional bodies of churches which live in mutual subordination and accountability. These bodies were comprised of Friends churches in particular national or geographical regions who gather together at least once a year for worship and business, hence the name for this gathering, “Yearly Meeting.” The term also came to be applied to the various regions, including both churches and members.